10 Athletes Who Struggled With Addiction

Perhaps of all the names on this list none were more hard hit by addiction than 2010 MLB MVP Josh Hamilton. He was once considered a blue chip prospect in 1999, but his drugs and alcohol fueled life caused him to slip far, FAR, away from a baseball diamond. Hamilton almost didn’t survive his addiction to drugs of all kinds but managed to somehow turn things around completely and become a huge success in the MLB.

His personal life however, never fully recovered it seems as after 11 years of marriage to Katie Chadwick, they divorced and had a very detailed agreement set in place. Katie isn't permitted to speak poorly about Josh to their children, she isn't permitted to have any man spend the night at her home while she has their children under the same roof, and she certainly is not allowed to hide or keep the children from Hamilton at any such time. Sounds like years of drug addiction have played a role in their break up being that the terms of their divorce are so finely tuned. Ironically, Katie's Father, Michael Chadwick played a pivotal role in Josh's recovery from substance abuse, which just makes it even more sad that they didn't work out as a family. 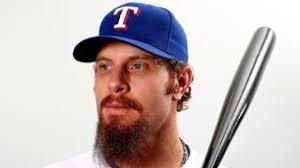