10 Diseases that are ALMOST History Thanks to Vaccines

History is heavily debatable, after all, as Winston Churchill said, “History is written by the victors.” However, one common trend that is evident throughout the ages is that man has been on a seemingly unstoppable path that only moves in one direction – forward.

It was the trial and tribulations of being faced with a long journey that spurred on the invention of the automobile. It was the vastness of the oceans and land that led us to invent the airplane. And it was our unending need to explore the universe that led us to invent the space ship. And while these are just a few examples of “moving forward” it seems unlikely and simply foolish if we were to turn our backs on these great, useful and inspiring discoveries. However, many people are doing just that, and going against what science has created and what has saved millions of lives. People today are turning their backs on what people a not that long ago would have fought far. People are turning their backs on vaccinations.

Billions of lives have been lost as a result of a disease. However, through our human nature to learn, improve and conquer, we have been able to mitigate the tragedies and have created ways to fight back against the seemingly invisible killers that take so many lives. Not only that, but through our discoveries, we actually the potential to completely eradicate some of these diseases, and have been successful in doing so, but it only works when everyone is on board.

From famous celebrities to “fly-by” experts, the news and popular media today are heavily laden with talks of vaccinations, and there seems to be a clear divide between two groups – those for and those against them. However, being in the business of fact rather than fiction, we would like to ask how many children you know who have suffered from polio before we begin to tell you why you should get your children vaccinated. Oh, the answer is none? That’s what we thought, and you have vaccines to thank for that.

Despite any misinformation that you may have heard or read about vaccines, the truth is that whatever way you to choose to view it, the benefits of vaccines far outweigh the negatives. So in case, you weren’t clear as to why vaccines are so important, here are few reasons for you to consider: The vaccine-preventable diseases haven’t gone away, rather, through vaccines, we are safe from their potentially impact. In many cases receiving vaccinations can mean the difference between life and death. Vaccines are completely safe and effective, and despite popular myth, you won’t get the disease from taking the vaccine that is designed to prevent the disease in the first place. And while we would hope that maintaining life would be reason enough to get a vaccine, perhaps knowing how it can impact your wallet may change your mind, after all, treating a vaccine-preventable disease can be extremely expensive.

In today’s modern world, most of us should consider ourselves lucky that we have not had to witness the world that is ravaged by preventable diseases. However, to this fact, it seems, as a result, people are forgetting just how bad it was and how far we have come. So as a reminder of how bad things COULD be, allow us to take a look at 10 disease that is ALMOST history thanks to vaccines. And if each of us does our part, we can hopefully get rid of the “almost.”

Many may remember back in 1995 when we all got Hepatitis A vaccines at school; or at least, that's what happened in this writer's case. And since the introduction of said vaccine, cases of infection have declined by a whopping 95 percent. Sadly, Hepatitis A is still widespread in many developing countries, especially those without access to clean water.

According to the National Institute of Diabetes and Digestive and Kidney Diseases, “Hepatitis A is a viral infection that causes liver inflammation and damage. Inflammation is swelling that occurs when tissues of the body become injured or infected. Inflammation can damage organs.” Typically, Hepatitis A is contracted as a result of someone ingesting even an extremely small amount of contaminated fecal matter.

While it can be easy to group hepatitis A, B, and C together, in reality, they are different forms of inflammation caused by three different viruses. While there are vaccines to prevent Hepatitis A and B, there is not one for Hepatitis C. The word “hepatitis” actually means an inflammation of the liver. 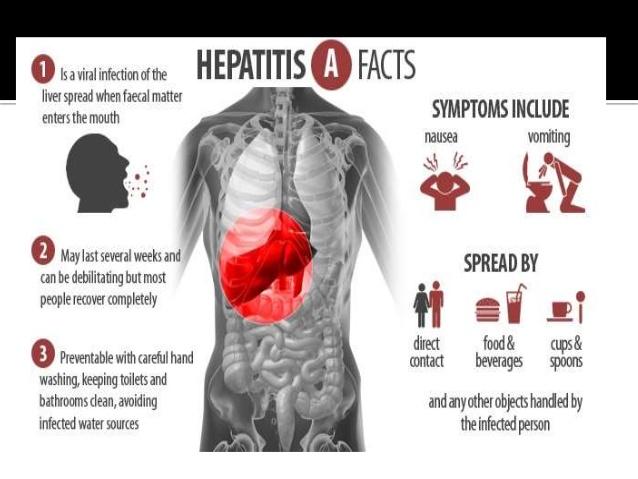