10 Signs That You Have Hives

Nuts, chocolate, fish, tomatoes, eggs, fresh berries and milk are all so of the most delicious foods that this natural world of ours can provide us with. Not only are they delicious (matter of taste), but they also provide our bodies with the countless nutrients, vitamins and minerals that our bodies need to reach and maintain peak levels of performance. Unfortunately, not every person is created the same, and what might be enjoyable and beneficial for one person and their body can be harmful and potentially fatal to another.

What we are referring to is allergens, or substances that cause the body to react in the form of an allergic reaction. This reaction can take many forms from fever, to swelling, stuffy nose, and depending on the severity of the allergy, possible even death.
[su_adsense_article_ad]

However, for this purpose of this article, we are going to focus on one of the most common reactions to allergens, and that is hives.

Hives, also known as urticaria, is an outbreak of swollen, pale red bumps or plaques (wheals) that suddenly appear on the skin. Their appearance is usually the result of either the body’s reaction to certain allergens. Hives, generally speaking, cause and itchy feeling, but may also burn or sting. Common areas for hives to appear include the face, tongue, lips, throat and ears. It is important to note that hives don’t only come in one size, but rather they can carry from as small as a pencil eraser to as are as a hubcap. Hives, typically speaking, only last for a few hours up until a day, especially after treatment.

When it comes to allergens, however, hives are not the only reaction one can expect. Angioedema is a condition similar to hives, but instead of on the surface; the swellings occurs deep beneath the skins surface. Angioedema is usually characterized by deep swelling around the eyes and lips and possible the genitals, hands and feet. This reaction normally last a little longer then hives do, but the swelling will usually subside after 24 hours.

While many of us might be familiar with hives and allergic reactions in generally, many more of us are unfamiliar with exactly what causes them. Hives and angioedema form when histamine, or blood plasma, begins to leak out of the small blood vessels in the skin. Allergic reactions to certain foods, insect bights, medication or even sunlight exposure can all cause a release of histamine, but nonetheless, the root cause for many hive formations is still unknown.

While there are several different types of hives that can appear as a result of a reaction, most of their signs and symptoms are similar. Bearing that in mind, we have taken the time to put together 10 of the most common signs of hives, so you can be prepared in the event they occur, and can reach out to a medical professional to get to the bottom of it.

While hives do have many factors that can be used in the distinguishing of them, perhaps the most common of all symptoms is the appearance of urticaria, or welts. These welts are red, itchy and usually appear quickly, only to dissipate shortly after, but depending on the allergen, can come back and are replaced by others.

These red areas will usually appear small, but can easily multiply and singular welts join together forming rashes. The area affected will be slightly elevated with a blanched center, especially when you press down your finger on the area of the rash. It is estimated that 20% of people will experience urticaria at some point in their lives. While it is common for the appearance of welts to form on the skin during an allergic reaction, it is also important to note that they can occur internally, which is why it is so important to speak to a doctor immediately, especially if you are unaware as to the cause of the reaction. 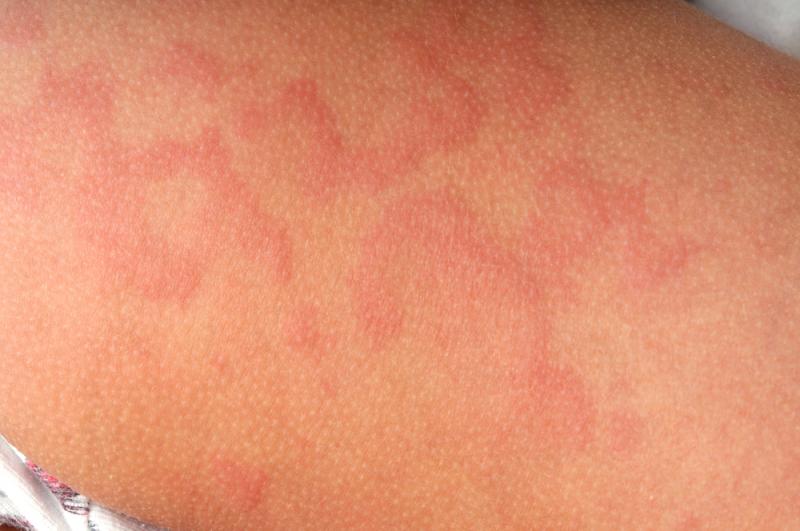