11 Famous Historical People & The Diseases They Likely Had

Almost as if precondition to do so, mankind seems to be constantly looking forward. We are always looking for what’s new, what’s next and what’s best; however, it may be more prudent to spend a little more time looking behind us and a little less time looking ahead. After all; as the esteemed author, civil and women’s rights activist Pearl Buck said, “If you want to understand today, you have to search yesterday.”

So why is the past so valuable to us? Well, if it isn’t for the events of the past, we would not have the present in which we all live in, for better or for worse. And while it is arguable that the past may or may not dictate our future, one thing that cannot be argued is that it most certainly influences it.

History is filled with iconic, influential and controversial figures; some of which are famous, while others are simply infamous. And although we as a species are constantly advancing ourselves, if not for our predecessors; the world we live in today would be a very different place.

It is easy for us to put some of the more famous men and women of history on a pedestal for their accomplishments, just easily as it for us to demonize those who had a less than beneficial impact on the course of historical events. However, regardless of where your views lay on these men and women, it should be understood without confusion that despite their accomplishments, these individuals were human, just like you and I; and as human, they were susceptible to many of the same pitfalls as we are – mainly illness. In fact, the reality was that it was less likely for many of these men and women to NOT be afflicted by illness; after all, the medicine of the times was a far cry from what it is today.

Some of the men and women on this list influenced and changed the course of history through their actions and accomplishments. Some ruled over millions, changed borders, and started wars. Others created beauty and art, the likes of which are still held in high regard today, with their influences all too apparent in our modern world. And more still pushed the boundaries, for better or for worse, of what mankind can accomplish.

So what do all the people on this list have in common? No, it’s not their influence or their accomplishments, rather, it was that these men and women from history managed to do so much while suffering from a serious medical condition. So take what follows not only as a lesson in history, but a lesson in human endurance, that despite what we think may be holding us back, there is still some many great things that we can all accomplish.

King George III is one of the most infamous kings in England's long history. Second only to Queen Victoria as England’s longest-ruling monarch, during his 59-year reign, King George III helped to lead Britain to victory in the Seven Years’ War, led England’s successful resistance to Revolutionary and Napoleonic France, and presided over the loss of the American Revolution. And as it turns out, he was also an incredibly sick man.

History has provided modern day doctors with ample evidence that King George III suffered from a condition known as porphyria. According to the world-renowned Mayo Clinic, “Porphyria (poor-FEAR-e-uh) refers to a group of disorders that result from a buildup of natural chemicals that produce porphyrin in your body. Porphyrins are essential for the function of hemoglobin — a protein in your red blood cells that links to porphyrin binds iron and carries oxygen to your organs and tissue. High levels of porphyrins can cause significant problems.”

What problems do you ask? Some symptoms of the condition include abdominal pain, swelling of the abdomen, chest pain, constipation, vomiting, insomnia, anxiety, high blood pressure, seizures, confusion, hallucinations, paranoia, and breathing problems to name but only a few. In the case of King George III, his condition was most notably characterized by his urine turning blue and temporary fits of insanity. Needless to say, the actions of this mad king are those of someone you don’t want in power, however, recently this diagnosis has been challenged as traces of arsenic have been found in the king’s hair. 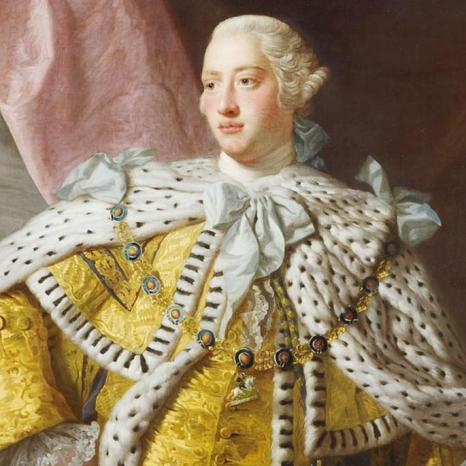