It is impossible to look at the history of mankind and the evolution of our modern societies without noticing the presence of alcohol throughout. Fermented beverages existed back to the earliest Egyptian civilization, and evidence exists of an early alcoholic drink in China dating back to 7000 B.C. However, that is only the start of mankind’s love affair with alcohol.

In India, there was an alcoholic drink called sura, which was distilled from rice and was popular between 3000 and 200 B.C. The Babylonians worshiped a wine goddess as early as 2700 B.C., and in Greece, one of the first alcoholic beverages to gain popularity was mead, a fermented drink made from honey and water. And it was this regular consumption of mead that led to Greek literature becoming full of warnings against drinking excessively.

Since these ancient times, alcohol has and continues to develop in unique ways in different cultures across the globe. And while there is no shortage of types of alcohol in existence, it seems that the reasons mankind drinks are relatively universal.

So why do people drink? For some, it is a simple reason of accessibility. Many families drink alcohol on a regular basis, and thus, it is around for the taking. Some people work in an industry in which alcohol plays a major part, and as the saying goes, “when in Rome.”

For children and teenagers, they normally have their own reasons for drinking. Many wish to feel more like an adult, and given that their hormones are raging during this precarious time, it only stands to reason. For some, it is an act of rebellion. After all, most teenagers are well aware that legally they are not supposed to be drinking; and criminal element aside, that principle is usually further imposed by parents. And more still will find themselves taking that first drink as a result of the ever powerful peer pressure.

While those are some of the common reason for children and teens drink, that isn’t to say that adults haven’t experienced those before, nor is it to say that teenagers won’t drink for some of the reasons as adults. Many adults drink to escape sadness or loneliness. Others to relieve pain, or out of habit or addiction. And some, strictly drink at social engagements or out of religious custom.

The reasons to drink are almost as numerous as the types of alcohol to chose from; however, another commonality throughout all of this; no matter where you live, or what you drink, is that if you do it to excess, you are going to wake up with a hangover. And you need only to have had one to know you don’t want one.

Most adults have experienced a hangover before, be it the morning after a birthday, bachelorette party, or simply a Thursday. And while some arguably experience them more often than others, most people, when asked, can probably recite to you either their own hangover remedy that they swear by or one that they have come across over the years. And knowing that hangovers cures have been in existence for as long as man has been drinking, it only stands to reason that they would vary greatly; from the very logical to the absolutely absurd. And in there lays the problem – how does one know what is real? How does one separate fact from fiction? Easy, all you to do is keep reading. For we have spoken to the experts (and that doesn’t include your local bartender or your uncle Kevin) in order to topple these longstanding hangover myths and bogus cures once and for all.

1. Hangovers Are No Big Deal

While by now we think you’d be rather convinced as to the physical detriments involved with drinking to excess, there is another, arguably more costly aspect of hangovers, and it's of a financial nature. It's estimated that hangovers cost $148 billion annually, with an average annual cost of $2,000 per working adult, due to missing work and poor job performance, according to a 2000 study in the journal Annals of Internal Medicine. Let those numbers soak in for a second.

And don’t be thinking that just because your alcohol level is done to zero that you are back up to full-functioning working order. According to research has established that hungover workers have an increased risk of accidents and injury. The more severe the hangover, research finds, the greater the neurocognitive deficits, including poorer reaction times, memory and attention span.

And just to reaffirm the physical impact, hangovers stress the body out! Drinking and being hungover causes a spike in the stress hormone cortisol in your body, which has a long list of effects. Although we need cortisol to respond to stress, excess levels of the hormone can lead to improper stress responses, altering our mental status, metabolism, and more.

We want to encourage everyone to have a good time, albeit a responsible one, however, know sometimes the evening can get away from oneself. So if drink to excess, be prepared to experience the consequences, and if you're not ready for them, then maybe you shouldn't be drinking in the first place. 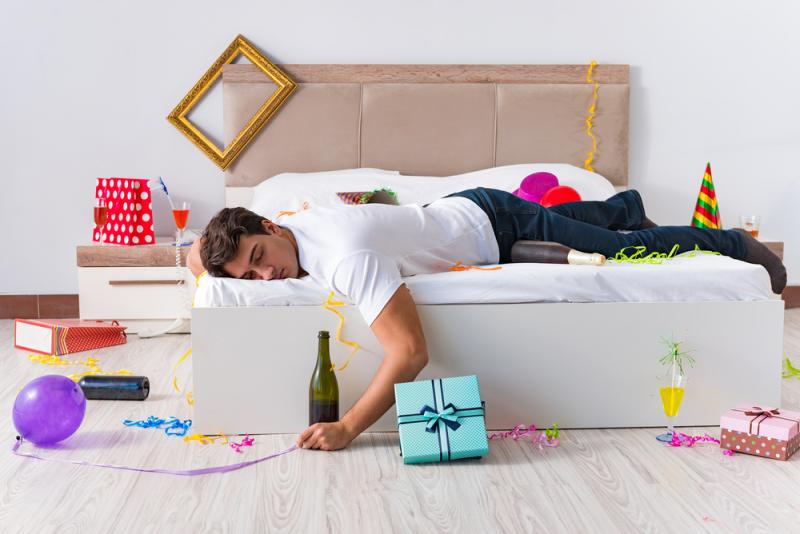