12 Reasons the Mediterranean Diet is the Best Diet

This should come as no surprise to most of us as we are constantly being inundated with them, but there are literally hundreds of thousands of diets out there. Don’t believe us? Well think of this way, while most of us think of dieting as simply a way to lo lose weight, in reality, diets are much more and can be used for gaining weight, lowering cholesterol, and ultimately living a long and healthy life.

The origins of the word ‘diet’ come from Old French diete and Medieval Latin dieta meaning “a daily food allowance”. The Latin word diaeta and Greek word diaita mean “a way of life, a regimen”. In our modern day, a diet can be best described as a preset course of eating and drinking in which the amount and type of food we eat are planned out in order to achieve weight loss or to obtain other lifestyle goals. And while the vast majority of us only look to dieting in order to lose weight, that is what we will focus on today.

When it comes to selecting a diet, there is no shortage to chose from, and it seems that the popularity of some diets changes as frequently as the seasons. There is the Atkins Diet, or Atkins Nutritional Approach, which focuses on controlling the levels of insulin in our bodies through diet. There is the Zone Diet, which aims for a nutritional balance of 40% carbohydrates, 30% fats, and 30% protein each time we eat. The focus is also on controlling insulin levels, which result in more successful weight loss and body weight control.

There are the numerous types of vegetarian diets, the majority of which are lacto ovo vegetarians, meaning, they do not eat animal-based foods, except for eggs, dairy, and honey. We have the South Beach Diet, which was started by a cardiologist, Dr. Agatston, and a nutritionist, Marie Almon and focuses on the control of insulin levels, and the benefits of unrefined slow carbohydrates versus fast carbs, and we have the Raw Food Diet that involves consuming foods and drinks which are not processed, are completely plant-based, and ideally organic.

For the most part, diets are very restrictive in what we can eat, and while the results may be what we desired, it is often these restrictions that cause many of us to falter and derail. However, there is a relatively new diet, or rather, one that is growing in popularity that doesn’t come with so many restrictions and yet is still showing prodigious results – the Mediterranean Diet.

The Mediterranean Diet is Southern European, and more specifically focuses on the nutritional habits of the people of Crete, Greece, and southern Italy The focus of this diet is on lots of plant foods, fresh fruits as dessert, beans, nuts, cereals, seeds, olive oil as the main source of dietary fats, cheese and yogurts are the main dairy foods, moderate amounts of fish and poultry, up to about four eggs per week, small amounts of red meat, and low/moderate amounts of wine. And while that may be a quick summary of the Mediterranean diet, its appeal runs much deeper than that.

So if you find yourself in the market for a diet to lose weight, feel better, and actually enjoy food, then look no further, for her are some amazing reasons that the Mediterranean Diet is the best diet.

As we all grow older, our brains naturally shrink and our risk of having a stroke, dementia or Alzheimer's rise, and almost everyone experiences some kind of memory loss. And while scientists know that people who exercise regularly, eat a healthy diet, avoid smoking and keep mentally stimulated generally have healthier brains than people who aren't as careful about diet and exercise; new research is out that further proves that point.

The study seems to confirm that eating an easy-to-follow Mediterranean diet can have lasting benefits for brain health. The study was published recently in the journal Neurology. For the study, researchers analyzed the diets of about 400 adults, 73 to 76 years old, in Scotland over a three-year period. During this same time, the researchers took MRI scans of the participants to analyze their overall brain volume and thickness of the brain's cortex. The researchers found that those who closely followed a Mediterranean-like diet were less likely to lose brain volume as they aged, compared with those who didn't follow such a diet.

To further add to the point, a second 2015 study from the journal Neurology also suggests that a Mediterranean diet may help make your brain about five years younger. Researchers figured this out by looking at the brains of 674 people with an average age of 80. They asked these elderly people to fill out food surveys about what they ate in the past year, and researchers scanned their brains. The group that ate a Mediterranean diet had heavier brains with more gray and white matter.

”The previous study only measured brain volume at a single time point, whereas we had longitudinal measurements: two measurements three years apart," said Michelle Luciano, a lecturer of psychology at the University of Edinburgh in Scotland and lead author of the latest study. "The previous study was therefore not looking at brain volume change over time but differences in brain volumes at a single time point," she said. "We also looked at two components of the diet, meat consumption, and fish consumption, and neither of these had an individual effect on brain volume loss. It might be that the diet as a whole is beneficial, and it is the combination of the foods and nutrients that protect against, for example, vascular disease and inflammation, which can cause brain atrophy," or volume loss. 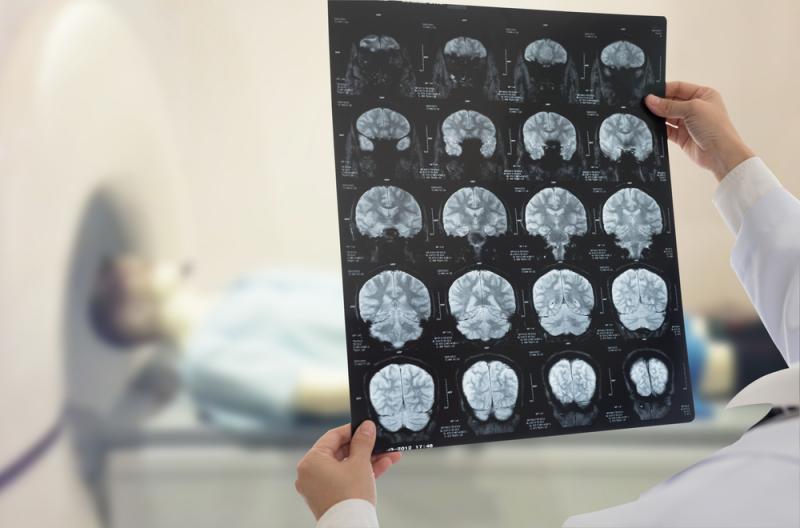