So you think you might be losing your hair? Probably not all of it, at least, not at once, but you are seeing a noticeable decline in your once thick and luxurious main. While it is true that men are more likely to lose their hair than women, thinning hair and hair loss is still quite prevalent in women, and equally if not more disheartening. After all, it more of a social norm to see a man without hair then woman.

If you are a man, the likely culprit behind your “hiding hair” is male pattern baldness. Known as androgenetic alopecia, it accounts for 95 percent of hair loss in men. In fact, for many men, the appearance hair loss will happen relatively early. Statistics suggest that 40 percent of men will have noticeable hair loss by age 45, 65 percent by age 60, and 80 percent by age 80. And while this may seem like an unavoidable event the more we age, there are many reasons and contributing factors to your hair loss; regardless of your sex.

Physical stress and trauma can cause premature and unwanted hair loss. Surgery, severe illness, car accident, even the flu, can cause temporary or permanent hair loss. “When you have a really stressful event, it can shock the hair cycle, (pushing) more hair into the shedding phase,” explains Marc Glashofer, MD, a dermatologist in New York City. In some cases your hair loss can be attributed to too much of a good thing, like vitamin A. Overdoing it on vitamin A-containing supplements or medications can trigger hair loss, according to the American Academy of Dermatology.

Sometimes hair loss can be explained by diet, and often it is a lack of protein that causes your body to ration its existing protein reserves by ceasing hair growth. Hormonal changes can also be the culprit, with many women reporting hair loss after pregnancy or when they switch or go off their birth-control pills.

Much like physical stress and trauma can cause hair loss, so to can emotional stress. However, when stress is the culprit (but not always) it won’t always precipitate the hair loss, however, it can greatly exacerbate it, says Dr. Glashofer.

Almost one in ten women aged 20 through 49 suffers from anemia due to an iron deficiency (the most common type of anemia), which is an easily fixable cause of hair loss. Or perhaps it could be hypothyroidism; the little gland located in your neck produces hormones that are critical to metabolism as well as growth and development and, when it’s not pumping out enough hormones, can contribute to hair loss.

As should be evident by now, there are many potential causes and contributing factors to a person’s hair loss, the least of which is often time. So now that we have established that there is an alarming amount of ways for a person to begin to lose their hair, we feel it only fair that we address the obvious, and arguably more important question – what can I do about?

For as long as man (and woman) have been losing hair, they have wanted to reverse, stop, and prevent the process from happening. While some methods used throughout history have been questionable at best, we decided to separate fact from fiction and provide you with a list of natural, easy, and science-backed ways to prevent hair loss. And always remember, hair loss, like most troubles in life, should adhere to this one simple adage – an ounce of prevention is worth a pound of cure.

Used for its medicinal qualities since the times of the ancient Egyptians, allow has not only been referred to as the herb of immortality, but it is also highly effective in the prevention of hair loss. Here’s how it works.

Aloe vera contains enzymes that can remove dead cells on our scalp so that they do not clog the hair follicles. If the hair follicles are clogged, it doesn’t take a doctor to understand that hair will have a hard time growing. A top of that, aloe is also alkalizing, and as a result it balances the pH of the scalp. You can apply it topically as a cleanser or take it internally to get its nutritional benefits. As if you thought aloe couldn’t do any more, it also contains sulphur, MSM, and amino acids that are invaluable to hair. 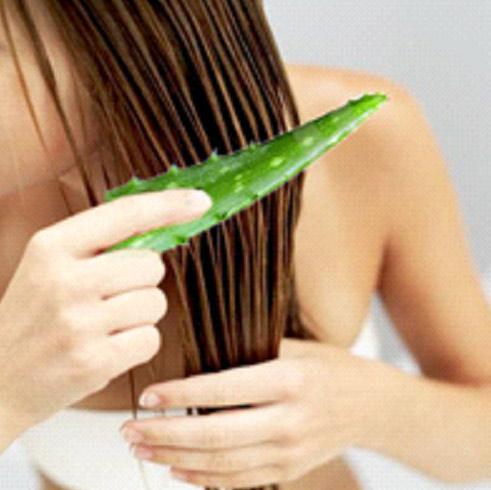