Everyone knows that the weight loss industry is booming, but when you learn that it is to the tune of $64 billion annually, it sort of gives it a whole new depth. According to the Food Research & Action Center – and just about everybody else – more than ⅔ of Americans are overweight or obese. However, two decades ago that was the only ¼ of the population. And yet, the weightless industry is seemingly growing along with our weights. Ideally, shouldn’t our weight be going down when the industry value goes up?

Economics aside, one thing that does seem to be a constant, albeit a large and varied one, is the reasons that people have for wanting to lose weight, which ultimately, is what fuels this booming industry.

Health is and should be the most critical reason that anyone has for losing weight. Fifty percent of participants in a 2007 study of overweight and obese people cited health improvement as the No. 1 reason for wanting to lose weight. Being overweight is associated with heart disease, stroke, type 2 diabetes and some forms of cancer. The World Health Organization notes that being overweight is the fifth leading cause of global death.

After health, appearance or vanity is the second most prominent reason that people have for wanting to lose weight. All too often, people who are overweight suffer from the social stigmas and are victims of prejudice and discrimination both in their personal and professional lives. This stigma is fuelled largely by the media and its obsession with thin models, actors and actresses that often set unrealistic and unattainable “standards.”

Much more people chose to lose weight because they want to improve their mood and gain confidence. Insecurities that are associated with being overweight like being discriminated against can easily foster feelings of anxiety, depression and low self-esteem. Study have further reaffirmed these theories with studies that suggest mood disorders and obesity are actually linked and that depression and bipolar disease may be a precursor to obesity. Fatigue and sluggishness that comes with being overweight can also contribute to depressive symptoms.

However, not all the reasons to lose weight are completely for oneself. For many women, the natural desire to want a child can be a major motivation to shed some weight. Science has proven that being overweight can lead to infertility; problematic pregnancies, with the development of conditions like gestational diabetes; and health complications for your baby, including neural tube defects and increased risk of being overweight or diabetic later in life. Being overweight can also accompany hormonal imbalances, which can cause a variety of endocrine illnesses.

So now that we know that there is no shortage of options to achieve weight loss judging by the size of the industry, and there is no shortage of motivation for people to do so, why is it that not only the nations but the world’s obesity rate are skyrocketing to epidemic proportions? And what’s perhaps a better question is why do some people, in spite of their best efforts, still find their jeans fitting a little a tight and the scale peaking a little higher than they’d like?

Fortunately, we have heard your questions and have done some investigating to determine some of the most common, and weirdest, reasons that you are unable to shed some weight. And remember, before you begin any significant diet changes or exercise routines, we encourage you to speak to your health care professional beforehand.

1. You're Using a Shopping Basket

Are you scratching your head? Hold tight. So you walk into the store and you need only to pick up a couple of things, however, that shouldn't mean that you grab a little basket instead of the cart. The reason?

Lugging a heavy load of groceries around the store may make you less likely to pick out the best items for a flat belly, found a study published in the Journal of Marketing Research. The researchers explain that the strain of carrying a basket makes shoppers more likely to reach for quick-grab impulse items—like cookies, crackers, and chips. 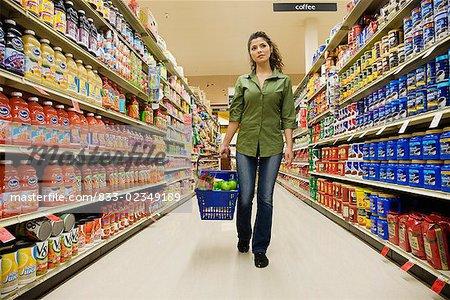